How to install vSphere 5.5 client on a domain controller

I get really excited when a new version of software comes out because I’m anxious to try out all of the new features. While exploring vSphere 5.5 however, I noticed that there are some serious consequences to diving in head first. Whether it’s the incompatibility of vSphere 5.5 hardware version 10 with the vSphere thick client or trying to do simple things like install vSphere 5.5 client on a domain controller, VMware has really started sticking it to their fans who use their free products.

For example, note in this screen shot that “In vSphere 5.5, all new vSphere features are available only through the vSphere Web Client.” In other words, if you want to use the features we’ve released, pay us a ton of money and go buy vCenter Server. I’m completely befuddled by this response to their fans given Microsoft’s push to drive virtualization costs down by including the fairly full featured hypervisor in it’s server package. 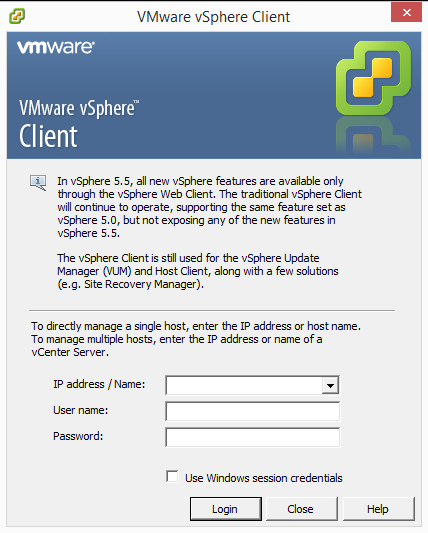 I’m certainly not going to avoid using vSphere 5.5, but I if I’m going to use it, I really needed to be able to install vSphere on a Domain Controller. If you download the vSphere 5.5 client and launch it on a domain controller, you get the following message.

I started doing some research and it turns out that getting the vSphere 5.5 client installed on a domain controller is as simple as launching the installer from the CLI with a simple flag on the end.

Launching it this way causes the client to disregard the fact that it’s installing on a domain controller.

Rumor has it that this way of disuading people from installing vSphere client on a domain controller is actually a result of Microsoft’s best practices given the following statement reportedly from VMware directly.

[callout] “We did this deliberately to enforce a Microsoft standard that our guys agree with – don’t install software on a DC, but they made that decision in isolation. Nothing more than that. So use the workaround safely and hopefully we can undo this in the future.”[/callout]

In any case, I’ve done it in a production environment without any issues whatsoever and feel comfortable recommending that others do so as well, just like you’ve likely done in the past. Enjoy, and as always, let me know if this helped you. Thanks!